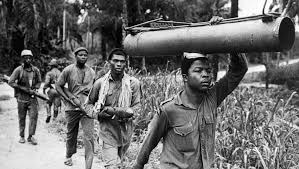 As we remember the Biafran heroes this 30th of May, 2018, it is important to emphasize that the path to Igbo Renaissance is not in any frivolous “sit-at-home” orthodoxy. The Renaissance of Biafra in Nigeria should simply not be ”hoped for,” as those who are “sitting-at-home” want us to believe. It should be sought through the reassertion of Igbo political and social consciousness in the midst of ever-growing integration in Nigeria. So, IPOB and the promoters of their ideas are once again demonstrating their incapacity to grasp the difference between symbolic and institutional power by ‘siting-at-home’.

Let’s face the fact: The political weight and muscles that IPOB carries today bore little resemblance to what it had once been. The reason is simple: Nnamdi Kanu, IPOB, and their backers lack political competence. They do not know who they can and cannot control; they failed to access the timing of taking actions like “ordering” a boycott of the Anambra governorship election; they failed to identify key allies, but, rather, aligned with wrong political actors like FFK and Fayose who were detrimental to pushing their agenda forward.

Rather than overwhelming its opponents, therefore, IPOB ran aground be its own arrogance, naivety, and miscalculations. Like a fowl that dug out the blade that killed it, IPOB, by their recourse to constituting themselves to public nuisance invited the Nigerian military that ended up quenching the thirst for power in their dry throat. The absence of a plan B by IPOB exposed the un-pragmatic routine of a leadership most of whom are still stupidly urging us to ‘sit-at-home’ and remained resolute on “Biafra or death” nonsense.

Talking about death, if the political leaders in Igbo land and the federal government taught any lesson to the IPOB, it is apparent that nothing was learned. IPOB accumulated a significant political capital amongst Ndigbo, which arguably could have been spent on a durable goal of establishing long-lasting political institutions in the Southeast. But IPOB believed, wrongly, that the balance of power between them and constituted authorities is static. As a result, when the political wind shifted, Nnamdi Kanu was blown away with the battered leadership of IPBO, leaving the followers scattered and lost.

IPOB has now dissolved into a sedimentary group of activists’ content with issuing empty threats and impotent “sit-at-home” directives. The present situation calls for a rethinking of the balance between pomposity and durable goal. ‘Sit-at-home’ is not a durable goal. IPOB’s sit-at-home directive is not reinforced by any analytic substance; there is no institutional leverage; no real power; no reinvigoration and therefore no real path to Igbo Renaissance.

This is when one would have expected the remnants of IPOB leadership to immediately hit the restart button, change strategy and begin a pragmatic politics. The latest “sit-at-home” order amounted to nothing more than running in a vicious circle. The dangerous thing about the ‘success’ of these ‘sit-at-home’ fantasy world is not that it is inconsequential; it’s that it seduces Ndigbo that are dissatisfied with the political process in Nigeria to believe that they are making an impact.

The path to Igbo Renaissance is Love, Not Hate. If we allow fear to take over our minds and thought, the result will be breeding hate and more fear. The bad news is not that IPOB failed, but that many Ndigbo are still refusing to learn, even the hard way, the importance of politics by still championing the headless “sit-at-home” mantra. A movement based on bigotry and intent on stirring ethnic-religions discord could offer no answers to the challenges facing Ndigbo that are resourceful and outgoing.

I suggest that before IPOB makes a real comeback aimed at Igbo Renaissance, as I hope they will, they should bear in mind that what Ndigbo need now is hope, not fear. They should thus renegotiate the tension between reckless, self-expression and strategic action. IPOB should be ready to adopt a dual orientation towards both symbolic and institutional powers. They have to show a pragmatic understanding of politics.

Engaging in “politics” is sometimes dismissed as a soft skill, but gaining support is an art, involving the ability to justify an agenda, establish credibility, appreciate what the other party is looking for, and remaining politically astute. Unfortunately, IPOB failed woefully by refusing to engage in “politics”.  They got it wrong by focusing on chaotic energy in an attempt to be wielding the symbolic power of the anger in the street. That strategy failed. IPOB and their promoters should, therefore, start afresh by first hitting the restart button.

After hitting the restart button, they should stop promoting a narrow goal of “sit at home” and praying to God as an honor to Biafran heroes. It is a goal that suffers from blurriness, incompleteness, and arbitrariness and leads to depression when such hopes are dashed.  That’s not political competence. Political competence is the balance between the single-minded pursuit of the lone ranger and the warm reach of the consensus builder. “Sit-at-home” without the support of any political structure with real power in Igbo land is frivolous.

Finally, IPOB’s fantasies regularly collide with reality, and so far reality has a perfect winning percentage. Nnamdi Kanu constructed a fantasy version of himself and then attempted to live it. He forgot that life does not always imitate art. The continuous recourse to a frivolous “sit-at-home” protest still proves that IPOB cannot articulate a new and pragmatic agenda for Igbo Renaissance. ‘Sit-at-home’ is like punching the head of a palm nut, hurting yourself, only to come back and punch the same palm nuts, aggravating the wound.

A true honor for Biafran Soldiers who fought gallantly during the civil war is a paradigm shift to a Renaissance with political goals that will refresh and perpetuate Igbos through education, proactive political engagement in such a manner that will ensure that Igbos grows and thrives in an open Nigerian society. The Biafran heroes are making an impassioned plea for all who care about the future of Igbos to not just ‘sit-at-home’, but to promote Igbo Renaissance by standing up, showing political competence and building bridges in order to make Igbos better off in Nigeria.