2019 Presidential Election: I Stand With Sowore 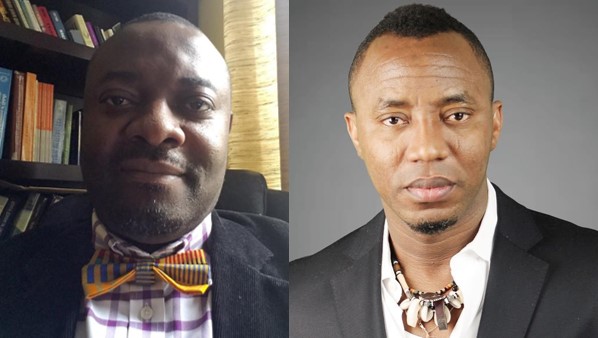 More than two years before the former U.S. President Barack Obama declared to run for the United States President, Oprah Winfrey appeared on Larry King Live on CNN, described Obama as her favorite senator and hoped he would run for president.  In June 2008, after Obama secured the Democratic nomination, Winfrey said that “I’m euphoric; I’ve been doing the happy dance all day. I’m so proud of Barack and Michelle Obama and what this means for all of us … the new possibilities for our country. And if he wants me to, I’m ready to go door to door.”

Nigeria is standing on the threshold of a crucial Presidential election that will determine the direction of the country for the foreseeable future. Twenty years from today, our kids born and unborn will look back at this moment in our checkered democracy and ask where I, you, we stood on February 16th, 2019. I want to state for the records, that I am standing with the African Action Congress (AAC) candidate Omoloye Sowore. Like Oprah Winfrey, I am euphoric in standing with Sowore, a presidential candidate with the promise of bringing new possibilities to Nigeria.

This is based on my conviction that in our quasi-hypocritical democracy where the political leaders have turned themselves to mini-gods, playing on primordial feelings to deceive the poor masses; in a system where political followership has been reduced to blind support based on ethnic and religious sentiments; and in a poverty-stricken society where dangerously corrupt politicians are wooing voters on the premise that the looters in our party are less evil than the looters in your party, only a political rebel, Sowore, that has no respect for the status quo can change Nigeria.

In endorsing Sowore, I am simply making a case for a political rebel that is willing to stand with Nigerian workers, student, peasants, and political orphans. Sowore understands that the success of Nigerian democracy over the past 19 years should be judged on the fairness of the political system on the people that lack personal advantages; the poor, the students, the civil servants in the lower carder and the rest of us that live under the perpetual condition of economic insecurity.

Unfortunately, however, the citizens that hover on the edge of official poverty measure the quality of Nigerian democracy on the contentment of the same affluent political class in the APC and PDP that has impoverished us by devouring the national wealth. These forgotten citizens are like the pawns in a chase game. They are the cheap foot soldiers used at political rallies for instant videos and images that are shared on social media platforms as an indication of grassroots support.

Sowore understands that the dividends of democracy are not measured by the contentment of the affluent political class, but in how the political system has implemented policies and programs aimed at lifting the ordinary Nigerians, the political orphans out of poverty. The challenging conditions faced by the political orphans in Nigeria like high tuition fees for students; low wage for workers; poor health care; poor sanitation and nascence of potable water; were once part of the general equation that the political system considered when it decided the largest economic questions. That’s what Sowore’s candidacy has been fighting to restore.

Mind you, though the majority of these Nigerians hover on the edge or below the unofficial poverty line, these political orphans are not the idle poor or the lazy youth. There are hardworking Nigerians that perform the least glamorous but essential jobs and ranks but virtually exist in a perpetual condition of economic insecurity. Sowore understands this and was the first candidate to promise a minimum living wage of one hundred thousand Naira.

Nigerian workers are invisible in the political debate among the elites of the two main political parties. Their absence is a critical element in the general democratic failure in Nigerian politics. Sowore remains the only visible Presidential candidate that is genuinely beaming the light on the everyday struggle of these Nigerians. He is reawakening the political consciousness that will open new possibilities for Nigerians. That’s why I am standing with him.

The citizens of Nigeria do not know the political class kept us away from the everyday issues we should care about by manipulating sentiments. As a consequence, our political activism in social media has lost coherence and real energy needed to rehabilitate our democracy. They have succeeded in making us dwell in righteous isolation. We are thus, rendered ineffectual, unable to speak coherently for ourselves. Sowore has, however, taken our political activism to the mainstream of politics in Nigeria. That’s why I am standing with him.

Aside from his focus on the peasants, Nigerian worker, students, and the poor masses, what resonated most for me in Sowore’s candidacy is his noncompromising stands on corruption. As you may have known by now, I am unapologetically for anti-corruption and that means that I am anti-anyone who corruptly enriched him or herself amid poverty in Nigeria.

In the weeks leading to this election, many Nigerians acted as if we have only the APC and the PDP, full of political actors that have amassed illicit wealth during poverty. I tried for a moment, to forget Buhari’s caricature of fighting corruption, but the thought of a Nigerian government led by a thief, Atiku, made me choke. Atiku’s claim to “get Nigeria working again” made me clench my teeth. Make Nigerian work again? What? For who? The looters?

We need to stand with Sowore on February, 16th 2019, if we want to stop them from using our looted commonwealth to keep us, the citizens in eternal subjection. We need to stand with Sowore in this long struggle for Nigeria’s soul. As Oprah Winfrey knocked on doors for Obama, I am knocking on the hearts and the political consciousness of all right-thinking Nigerians for Sowore.

This fight is our fight. I will stand with Sowore on February 16th. What about you?