Will Rotimi Amaechi Make Himself and Igbo Hero by Attracting Rail Lines to the Southeast?

One powerful Igbo proverb reminds us that those who are born on top of the anthill take a short time to grow tall. There is no doubt that Hon. Rotimi Amaechi was born on top of something bigger than an anthill. His political career is a testimony that he who God don bless, no man can course.

Rotimi Amaechi became the governor of Rivers on October 26, 2007, after the Supreme Court ruled that he was the rightful candidate of the PDP and winner of the April 2007 Governorship election. This was after his name was substituted by the PDP aster their state primaries. It was, thus, Amaechi that set the precedent that has deterred political parties from indiscriminately substituting the names of candidates that won primary elections.

Also, Hon. Rotimi Amaechi, against all odds, have remained relevant, very relevant, politically in the administration of President Buhari. He is currently spearheading a revolution in the expansion of a network of rail lines across Nigeria.

There was, however, some backlash when be claimed that he refused to sign the contract for the Lagos-Ibadan railway until the Chinese construction firm, CCECC agreed to meet three conditions one of which was the establishment of the University of Transportation in Buhari’s hometown. Many Nigerians from the south wondered why Amaechi did not attract the university and rail infrastructure to the South-south or Southeast region. The Igbos in the Southeast particularly feel let out in the rolling out of rail lines across Nigeria.

That was a legitimate expression of reservation and concern. But, it is not, completely, the cook’s fault when the cassava turns out to be hard and tasteless. Clearly, it is not Amaechi’s fault that none of the rail lines that the APC administration is completing with borrowed billions of dollars did not pass through any major city in Igbo land.

It is, also, misleading to look at the completion of many rail projects across Nigeria and blame President Buhari for excluding the Igbo cities. The truth is that just like the Daura-Jibia, Kano-Lagos rail lines, the Abuja-Kaduna is not a new initiative. It is in a plan approved by the PDP under Jonathan, which Buhari is now implementing.

The Igbo political elites that have been with PDP through Presidents Obasanjo, Yar’Adua and Jonathan will need to explain to Ndigbo whether there were sleeping or only interested in their pockets when the rail maps were being designed and approved.

However, Rotimi Amaechi can make himself an Igbo hero by attracting and completing major rail lines across the heartland of Igbo land. It is not too much to ask for. He who loves the vase loves also what is inside. Rotimi Amaechi prides himself as an Igbo son. It is time for him to start showing signs of love by attracting projects to the Igbo States.

The good mother knows what her children will eat. Rotimi Amaechi knows what the people of the old eastern states need. They need infrastructure to maximize their entrepreneurship. To be specific, the Igbos need rail lines linking the heartland of the southeastern region to Lagos (west) and Abuja/Kano (north). Also, there is a need for the design and construction of a ring of a rail line that will link the major commercial cities in the southeast Onitsha-Enugu-Umuahia-Aba-Owerri and back to Onitsha. 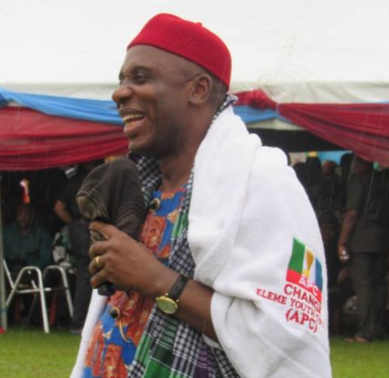 Finally, the eye is used to tell whether the corn is ripe. Rotimi Amaechi is ripe. As the saying goes, a boy sent by his father to steal does not go stealthily but breaks the door with his feet. Ndigbo are sending Amaechi to balance the equation in the rollout of rail infrastructure in Nigeria. That equation can only be balanced when the people of the southeast are included.

The elephant does not limp when walking on thorns. Rotimi Amaechi is an elephant. The Igbos, are thus not expecting him to be limping while pushing to attract the rail lines to the heart of Igbo states. That’s how he can make himself an Igbo hero.